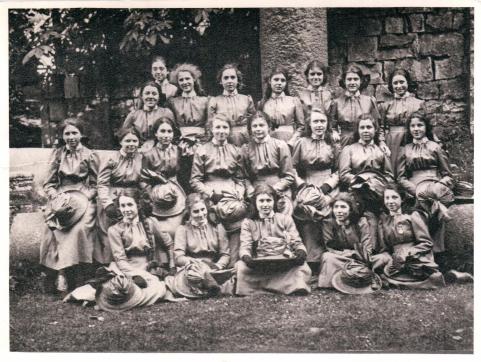 This delightful photograph, dated 1913, shows a group of older girls at Clapham wearing their uniform which appears to include the most glorious hats! There is no other photographic evidence of hats like these so perhaps they were only worn by the senior girls or the prefects.

On the reverse of the photograph, the girls are identified, with only one girl not known. Our records show that three of these girls later went to South Africa, one possibly to New Zealand, one to Canada and one to America. Two of those pictured became staff members of the School.

All of them were born between 1896 and 1898 and it is quite remarkable how many of them reached their eighth or ninth decade, with one almost making it to her centenary. Perhaps this is a tribute to the start in life the School gave them, despite their misfortune in losing their fathers at such an early age, mostly before their tenth birthdays.