Parents up and down the country are this week experiencing for the first time that rite of passage known as ‘First Day at School’. Their little darlings, clad collectively in their brand new school uniforms, clutching – some apprehensively, some in fevered excitement – their school bags, are being deposited at school gates. It might be small steps for little legs but, paraphrasing Neil Armstrong, it is one small step for a child, one giant leap for parenthood. Parents watch in astonishment as their tinies take their first steps away from them and many of the tears shed are actually those of the parents who can’t quite believe that those helpless little babies who needed them for everything are the same people now skipping gaily across the playground.

From a different perspective, there are probably a number of schools taking in pupils for the very first time this week, either because they are brand new schools or because they are taking younger children for the first time. For those establishments, it is also a time of trepidation. Will all the planning come to fruition? Will everything work as it should? Will the logistics all come together?

Wind the clock back 228 years and the very first pupils were embarking at a school in a house in Somers Place East with, in the minds of the steering Committee, many of those same worries. After a year’s intensive planning, a new school came into existence that still operates today. The Royal Cumberland Freemasons’ School officially began in 1788 but the first pupils entered the school on 5th January 1789. The Morning Herald of Thursday, January 8, 1789, stated:

It must have made an interesting spectacle for a (probably) grey January day. There must have been a goodly number of carriages. There were fifteen pupils, presumably the Matron (although she could have been waiting at the school to receive them – the records do not indicate), the gentlemen of the Committee and possibly some of the ladies and subscribers who appear to have witnessed the event.

The actual route is unknown but it is likely to have passed the area where the National Gallery was later to stand (built 1824), along past the British Museum (built 1753 so it may have been a witness) and up to what is now Euston Road but what was then known as the New Road. The gentlemen of the committee retired to dine at St Alban’s Tavern but the new pupils stayed at the school. And unlike today’s mummies and daddies waiting at the school gates at home time to hear all about the experiences, these little girls remained in the school house until they were old enough to leave school aged 15.

The School went on to have more First Days as it moved house three times. In 1795, it moved from its home in Somers Town to Southwark. It moved without any ceremony. In fact, the only reason any date is known is because the Minute Books of the Committee record that the meeting was held in ’the new School House’.

By 1852, the School had long outgrown its allocated space and so it moved again – to Clapham.

This was accompanied by a little more pomp and ceremony. £400 was put aside “so that everything might be done with grace and splendour” (G Blizard Abbot, Royal Masonic Institute for Girls from 1788 to 1900) – the equivalent today of £16,500. On August 2nd, visitor numbers were estimated to be between 3000 – 4000. Amongst other ceremonial events, one of the pupils, Caroline Rhoda Davies, recited a poem especially composed for the occasion. Nine hundred dined and, as this was presided over by the Grand Master, it can be assumed that they were all Freemasons. There was also dancing in the grounds to a quadrille band and other military bands and the last visitors left shortly before midnight. And the pupils in all this celebration? Well, sadly, they were still at Southwark because they didn’t actually move until December 9th!

For the next 80 or so years, the School remained on its third site with a variety of adjustments and expansions to accommodate the growing numbers. One of these adjustments was the Junior School disappearing into Surrey. In August 1918, the younger pupils had their next First Day when they moved to Weybridge. There were 45 pupils which included 20 pupils for whom this was same school, new site and fifteen for whom it was entirely a new school. But the Clapham site continued to be crowded and eventually it was realised that, not only was a bigger site required but that it was highly unlikely to be in London. In 1926, Rickmansworth Park was found. The new buildings were ready by 1934 and on March 24th 1934 the doors of Clapham were locked for the last time (the honour went to Eileen Hones, then the youngest member of staff) and staff and pupils went off for their Easter break. When they returned almost a month later, it was the First Day of all First Days and almost 400 pupils and all the teaching staff, domestic staff, ancillary staff and maintenance staff found themselves in grounds and buildings that were as yet unfamiliar. A pupil who was there at the time commented later on the way many staff and pupils kept getting lost. But then, as well as being a new set of buildings, it was also huge. The old school, including the playgrounds, would have fitted inside the Garth of the new one – and the Garth is approximately 1.5% of the total acreage! It is a tribute to the leadership of Bertha Dean (Headmistress) and Florence Mason (Matron) that it all went so smoothly. As a member of staff at the time commented: “We had moved house that was all: the meals were on time and the bath water was hot …” In June 1934, the site was officially opened by Queen Mary. 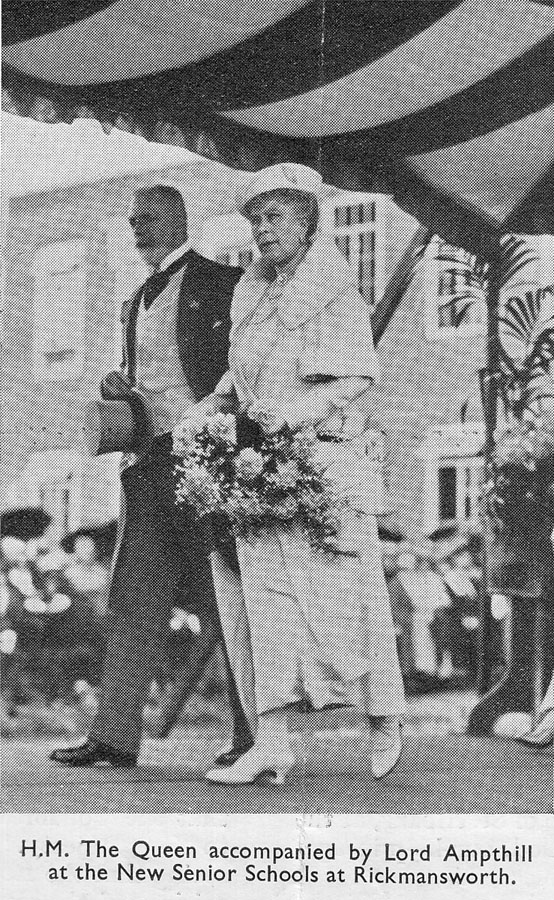 The weather, as it so often is in British summer time, threatened to be inclement (and it did rain earlier in the day) so the route to be taken by the Queen was considered. As the parquet floors were thought to have a risk of being slippery if wet, it was decided to lay a temporary rubber matting down over the very slight slope in the corridor between the Great Hall and the Dining Hall. Naturally, it was red in colour. And this temporary matting was still there fifty years later!

The School has now been on this site for the greatest length of time it has been anywhere – 83 years and counting. In that time, not only has it seen 83 First Days – one for each year – but it has also seen younger and younger pupils having their own First Days. Each September, there are new pupils joining the School community and when you are a Newbie and it seems as if EVERYONE else knows exactly where they are going, it can be a little daunting. In recent years, a new style First Day has been trialled. Known as Focus Days, the entire school participates in activities on a theme. As, then, it is a new experience for everyone, it has the effect of putting even the most bored teenager (hey ho, another year) on her mettle as she does not know quite what to expect. In the last decade or so there have been, to name but three, Chevalier Day (2013), Environmental Day (2012) and 1934 day (2009) as the School celebrated its being on the site for 75 years. Below are the staff on two of the Focus Days.

These are First Days to remember. But then, whatever their format, your First Day at School is always important.